This Elmwood home’s garden serves as a haven for the homeowner and his friends, who enjoy frequent outdoor parties under the twinkling lights in the evening. 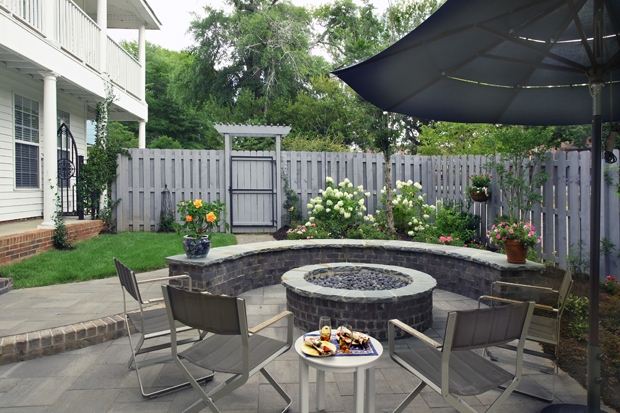 Robert Sox greets almost every morning in his garden, contemplating his day over coffee and stellar views.  It’s a private sanctuary that was designed for him by architect Michael Haigler, who took advantage of every square foot that could be reclaimed from a tiny side yard and overgrown hedges.  “After moving back to Columbia about ten years ago, I bought this house, which is about eight blocks from where I was born,” Robert said. “After I retired as owner of Best Bottle Wine and Gifts, I decided to have some work done to try to enjoy outdoors a bit more. I also wanted a hot tub, but the back porch was tiny, and it seemed an impossible task. In stepped Michael, who had a vision much larger than I would ever have dreamed possible.”

His wish list was abundant. Part of the plan included reclaiming parts of the side yard that were overgrown with huge bushes, covering perhaps half of the area. Another challenge was the placement on a corner lot. After the massive bushes were removed, privacy became an issue. “Fortunately, the city allowed us to construct a privacy fence along the property line, which kept the seclusion, but allowed the usable space to more than double,” Michael said.

“I love being outside as well as entertaining outdoors,” Robert said. “I wanted seating areas, garden art, my hot tub on the porch, and plants everywhere.” And so Michael went to work. Now, the garden has become a popular destination for neighborhood gathering, including the famous Elmwood Park Porch Parties.

First, the porch. It was doubled in size to accommodate the hot tub. The space was also large enough for a small seating area and plants, with spaces for art to create an outdoor living atmosphere. A recent find at Soda City Market highlights the state and the blue color echoed on the porch. Robert planted jasmine and installed a trellis for climbing. Curtains increase the privacy factor while the jasmine grows and spreads. Although next door neighbors are close, the space feels secluded.

Steps lead to the side garden and that’s where more magic happens. There are four access points: from the back porch, front of the house, front yard, and back of the house with its driveway and detached garage. The front yard entry is marked by a pergola and tiny patch of grass. A Lady Banks Rose is making its way over the door.

Across the walkway to the front door, two steps lead down to the upper terrace. Jasmine is being trained on the columns alongside that entry and will soon infuse the area with its charming southern fragrance.

The fourth entry is from the garage area and is marked by a lovely set of wrought iron gates with decorative medallions. A tall gray privacy fence adds color. The fence was designed with two faces, having alternating fence boards for privacy, but allowing breezes to flow through easily.

“Another challenge was the slope of the land, which required subtle terracing,” Michael explained. The slope was accommodated by a step-down from the front door/yard entry points.  The first area is the fire pit and curving bench, which does double duty as a retaining wall. The fire pit was originally planned to be wood burning, but after thinking about it, the ease of flipping a switch for instant fire was too attractive to pass over. No coals to dispose of or lingering sparks at the end of the evening. It was an excellent adjustment.

“When they were building the fire pit and bench, I was called out to look at the space,” Robert mused.  “We decided to move the two structures a bit closer together so visitors could sit on the bench and put their feet up around the fire. It is the perfect distance apart for casual enjoyment.” He also liked watching the craftsmanship of the stone cutters who worked on site to make sure everything fit perfectly.

“The hardscaping design goal was to create a series of outdoor “rooms” for different entertaining purposes,” Michael said. The placement of outdoor rooms coincides with the existing windows on the side of the Charleston-style home, creating interesting focal points from the interior. Just beyond the fire pit is the dining “room” for al fresco eating. To the side is a sitting area where Robert has staked his claim for the aforementioned early morning contemplation. “During this time where we’re all social distancing and staying home, I am so grateful to have this wonderful area to enjoy,” he shared. “I have friends in big city apartments and they’re trapped, with no outdoor space to enjoy. “

Another feature which adds beauty is the fountain. The gentle splashing is soothing, and it doubles as a birdbath in summer.  It’s yet another striking focal point of the garden. 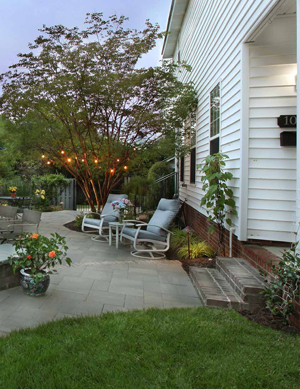 “During my time in the corporate world, I spent five years living in the Czech Republic, in a small town,” Robert said. “There wasn’t much entertainment but everyone had beautiful small gardens where neighbors visited one another and enjoyed the outdoors. I developed a real appreciation for what joy a lovely garden of any size could bring to daily living.”  He remembers rain barrels to hold water and beds with flowers and vegetables. For him now, his outdoor space is almost spiritual, even though he never imagined how amazing it could be. Although he had lots of creative ideas, he credits Michael, along with John Long, the landscape designer who developed the planting plan, and the installation of fencing, lights, gates and hardscaping done by Midlands Landscaping.

And the best is yet to come as the ash trees grow (two feet a year!), to create more afternoon shade, and the trellises are covered by Confederate Jasmine, Red Mandevilla and other climbing beauties.  Fragrances will be even more intoxicating in the seasons to come.

It’s also a haven for Robert and his friends, who enjoy those outdoor parties under the twinkling lights in the evenings.  Even if no party is planned he frequently heads out to his favorite chair to watch twilight approach as he sips a glass of his favorite wine. “After 25 years living all over, this is where I am going to stay because it’s such a peaceful, beautiful place for me to enjoy retirement.”