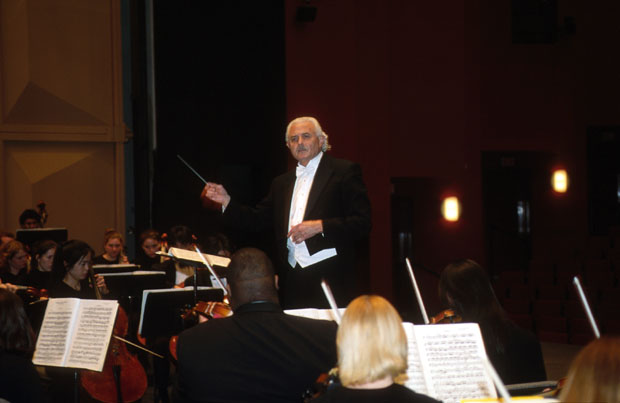 To be both in the moment and ahead of the moment is requisite for Don Portnoy. Intrinsically and externally, his baton is nearly always poised, raised even when he is not conducting the University of South Carolina Symphony Orchestra - or any one of numerous other symphonies he leads.

If he is not conducting music, he is thinking about music. For this year’s Individual Winner of the state’s highest artistic honor, the Elizabeth O’Neill Verner Award, music is both his life’s work and also his play.

Always on his mind, music envelopes him. Even at high altitudes. “Music has allowed me to travel, which I love,” said Portnoy, who stepped onto the podium here in 1986, after accepting the Ira McKissick Koger Endowed Chair for the Fine Arts at the University of South Carolina. When he is en route to a rare destination he is not yet familiar with, or one where he will be a guest to discuss an upcoming concert or workshop, or to settle in for a few days of preparing an orchestra for a signal performance, music is the both the itinerary and the time-filler.

“It’s not unusual for me to be working on a score while in flight. I also take along my Kindle for reading and, if possible, catch some sleep. When we land and come into a city, my wife Karen and I like to go walking, become familiar with the area, possibly by taking a city tour, as we did in Vienna recently.”

The leisure parts of Portnoy’s sojourns typically are the preludes or encores of trips arranged by musical institutions eager to have him raise his baton in their locale. His recent Spring Break from USC was spent in Prague where plans for a return trip and concert were discussed.

“Once the usual three-hour rehearsals are done, we often have the remainder of our days to ourselves -unless our hosts have related events for us to attend, such as receptions or dinners.” In Europe, Asia, and South America, Portnoy has conducted orchestras in 24 countries – a lot of frequent flier miles!

On their travels the Portnoys seek out art, in museums and galleries, and often bring home new finds for their collection. “It was through a visit to an art gallery in China that we learned of the young violinist, Zeyu Victor Li, who returned to perform with us in late March. A gallery owner mentioned that her nephew was a very fine violinist, and when she added proudly that he was studying at Curtis (Institute, in Portnoy’s native Philadelphia), I began listening more closely.”

Li, who first played with the USC Symphony when he was sixteen years old, returned for an encore performance when the young virtuoso was the same age Portnoy had been when he left his Philadelphia home for New York to absorb even greater complexities of music - in an even-denser city. Following Li’s rousing performance, the conductor introduced the youth to appreciative audience members in the Green Room.

No wonder it is so characteristic of Portnoy to make guest performers feel at home in Columbia; he is made welcome in world cities to which he travels. The oft-lauded music director’s affinity for, and comfort in, metropolitan centers emerged early, not only because his formative years were spent in ethnically-rich, inner city Philadelphia, but also because music he loves and conducts is often internationally represented and rooted. (Note: Yet one of his most prestigious accolades, Columbia University’s Ditson Conductor’s Award, was for his commitment to the performance of American music.)

“For me, as a kid, the Academy of Music in Philadelphia was a magnet. Some of us got out of school early and went, by trolley, to make our way up into the nose-bleed section where, for a couple of dollars, we could listen to classical music being performed by the fabulous Philadelphia Orchestra. I heard some remarkable musicians that way.”

By his junior high school years, this son of Russian Jewish immigrants had attracted the attention of an influential musician in Philadelphia. “He heard me play and opened the right doors; I was able to take violin and piano lessons at the Philadelphia Conservatory.” He played so well he was recommended for a Juilliard scholarship. “I was only 17 when I left home for Juilliard, to be on my own in New York. The scholarship positioned me to play with much better musicians.”

Portnoy recalled that, “One renowned music educator and composer who had influenced me greatly was already at Juilliard, teaching, by the time I got there. Vincent Persichetti lived and performed in Philadelphia during my youth.” Portnoy received his B.S. degree in violin there, then went on for a M.M. (musicology) degree from Catholic University, and a D.M.A. (violin) degree from Peabody Conservatory.

His terminal degree in hand, he then entered the United States Marine Corps where he was a violinist in the USMC Chamber Orchestra, part of the “President’s Own” Marine Band which is the nation’s oldest professional musical organization. Following that service his acceptance of a West Virginia University teaching position began his long career as a music educator, arts manager, director, conductor, and performer. The University of South Carolina is only the second institution of higher learning at which Portnoy has been a faculty member. He has, however, held multiple simultaneous conducting posts.

As a papa, Portnoy is proud of his sons, their accomplishments – including their families. “My older son Darin is a physician; he serves as International Vice President of the Board of Doctors Without Borders. My younger son Elliott is an attorney and is the global CEO, heading the world’s largest law firm.”

Portnoy also is pleased by the achievements of musicians and conductors he has mentored. Boston Pops’ Keith Lockhart, a graduate of Furman University, was assistant conductor during Portnoy’s years at the Pittsburg Civic Symphony. Lockhart also leads the BBC Concert Orchestra.

Portnoy joys in noting accomplishments of students, such as Victor Liva, Music Director of the Cleveland Philharmonic Orchestra, as well as those who have come through the Conductors’ Institute, held in Columbia each summer. Portnoy brought the already-successful Conductors Institute to South Carolina from West Virginia where he founded it. Marin Alsop, an institute completer, now conducts the Baltimore Symphony Orchestra, and pre-eminent American composer David Diamond returned to help celebrate the Conductors’ Institute’s 10th anniversary. JoAnn Falletta, Music Director of the Buffalo Philharmonic Orchestra and the Virginia Symphony Orchestra, also is Principal Guest Conductor of the Brevard Music Center. Portnoy has led the Brevard North Carolina Philharmonic for seven years.

Soon after accepting his Verner Award, Portnoy will welcome arriving conductors for this summer’s two-week institute, then he will head off to Queens College for another conductors workshop.

Then the maestro will be able to kick back for a bit. And listen to some good music. And prepare for another USC Symphony season, beginning in August.

In addition to being Music Director and Conductor of the University of South Carolina Symphony Orchestra since 1986, he has held that same position with the Brevard N.C. Philharmonic for the last seven years.

In addition to myriad conducting roles in the United States, he has conducted orchestras in 24 countries including: Argentina, Brazil, China, England, France, Germany, Poland, Russia, Taiwan and South Korea.

Over two decades he has conducted every major orchestra in China, including the Beijing Symphony, the China Philharmonic Orchestra, and the China National Symphony Orchestra.

The China Opera and Dance Symphony in Beijing, and the Harbin Symphony Orchestra appointed Dr. Portnoy as principal guest conductor for multiple seasons.