Coming soon to a dinner table near you. Fresh, locally-sourced leafy greens, picture-perfect enough to grace a flower arrangement as a salad plate 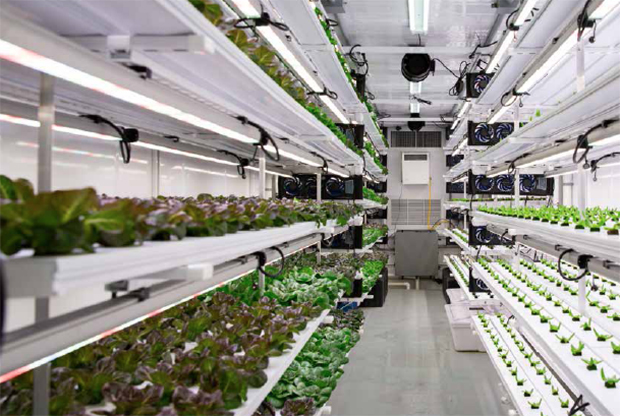 Your mealtime upgrade is coming thanks to Vertical Roots, a Charleston-based company that’s perfecting the technique of growing a variety of greens in repurposed shipping containers using hydroponic technology.

Vertical Roots, which is currently growing 24 containers at its Charleston operation, is producing greens available in Lowcountry supermarkets such as Harris Teeter, Whole Foods, Lowes and Earth Fare.

Grocery shoppers find it easy to spot the company’s greens, carefully arrayed in clamshell containers. Lettuce is encased with the roots still attached to guarantee freshness. Among the offerings are of baby romaine, red, green, oak and bib lettuce and a signature greens combination.

Banking on its success in the Lowcountry, where the company serves more than 50 area restaurants, Vertical Roots is now setting its sights on the Columbia area and beyond.

Plans for the Midlands are to set up 54 upcycled containers beside the Senn Brothers Produce warehouse at the S.C. State Farmers Market over the next several months.

Senn is one of South Carolina’s leading produce distributors and the proximity to the Vertical Roots containers will enable it to obtain greens at their peak freshness year-round.

With the expansion, Vertical Roots is seeking would-be farmers to operate the containers. No need for an agricultural background, they say. Hiring is based on individual qualities that include reliability and attention to detail.

Full-time and part-time job seekers can find more details about work at the company’s website: verticalroots.com. The company also has a presence on social media including Instagram, Facebook and LinkedIn.

Tessa DiGennaro, operations manager at Vertical Roots, has been with the company for over a year. She says joining the VR team appealed to her, “because I loved their mission of providing sustainable, living wage jobs to farmers. Over a year later, I still love working for Vertical Roots. I truly learn something new every day”

S.C. Commissioner of Agriculture Hugh Weathers says the Vertical Roots expansion speaks to the technological changes that are sweeping the farm community. “I’m especially excited with the efficiencies in the use of labor, water and the impact on the environment,” he says.

“I’m also impressed with the Vertical Roots people. They have a passion and believe in what they’re doing. We certainly expect them to be successful.”

Vertical Roots makes a point about the freshness of its products, pointing out that 95 percent of the nation’s $6 to $9 billion greens harvest is based on the west coast where the crops are grown conventionally.

With those fields 2,000 miles from South Carolina, freshness is a question mark not to mention the expense and environmental cost of trucking it to East Coast markets.

Moreover, there have been safety and environmental concerns. Last year an E. coli outbreak associated with romaine lettuce hospitalized dozens of people across the U.S. and Canada.

Vertical Root’s containers are manufactured in Charleston by Tiger Corner Farms, a companion company. Another companion, Boxcar Central, provides the software and control technology that automates growing conditions. All the companies operate under a parent company named Amplified Ag Inc.

The technology built into the containers would make NASA proud.  Like a space capsule, the interior environment is calibrated for optimum conditions. The greens are grown in tiers of shelves attached to the sides of a 40-foot container. The 350-square feet of growing area can produce up to 3,400 plants at a time.

Seedlings are first propagated then transplanted to trays that allow the developing plants to grow roots that dip into a flowing nutrient solution. Computerized controls regulate the flow of the nutrient solution, enhance the interior environment with carbon dioxide and control banks of LED lights calibrated to an optimum luminosity.

The system, Weimer says, can produce a full head of specimen lettuce, without pesticides, in about 35 days, which is typically half the time it takes to grow a plant in a field. The containers can produce multiple crops annually, unencumbered with issues produced by unpredictable weather.