Villa: Another Word for Home

Villa means home, and that Mediterranean word has personified The Villa Restaurant for four decades of serving memorable homemade Italian dishes to Columbians and residents of surrounding communities. 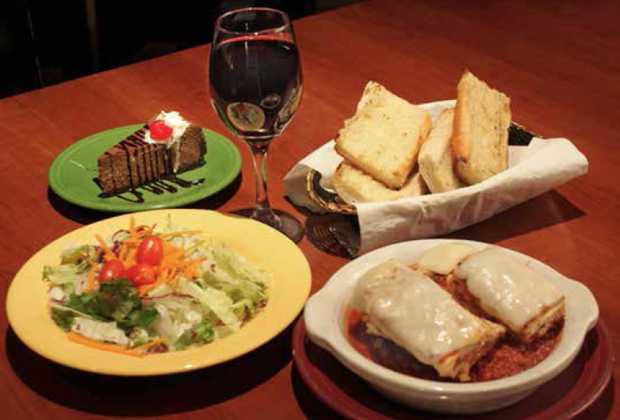 Family owned since 1977, The Villa had made consistency its hallmark, always cooking - from scratch each day - recipes that that have inspired loyalty, bringing patrons back week after week, year after year. For 40 years.

John Scarborough has been The Villa’s patriarch since its early days. “Many of our long-time patrons remember us all the way back to Five Points.” Scarborough said the early restaurant, Pizza Villa, was situated where Pawley’s Front Porch is now located.

It had been part of a franchise, but the franchise was foundering by the time it got Scarborough’s attention. “My brother and I bought the building, and when the restaurant became available, my brother said, ‘Looks like we’re going into the restaurant business.’” That was in February 1972. Scarborough still owns the building in which Pizza Villa was located.

With no food background, Scarborough came in, sleeves rolled up, but it didn’t take his brother long to determine he didn’t like the restaurant business. “I saw the potential and determined to stick with it.”

What came to Scarborough with the purchase of the building were murals commissioned by the franchise owners who started the restaurant in that Harden Street location.

“They had brought in Jade Pasteur who was based in St. Simon, Georgia, at that time. She was a great niece of Louis Pasteur.” Louis Pasteur was the French biologist, microbiologist and chemist renowned for his discovery of the principles of vaccination. “Jade Pasteur was renowned in her own right – as a painter and muralist in the French Impressionist style.”

Her work covered some of the Villa's walls, but left other walls Scarborough felt were right for more art. “I asked Ed Hancock to add some more murals.”

Hancock, a retired architectural designer and marketer for Jenkins, Hancock and Sides Architects, was then at that hungry stage of his career. “I would have painted a doghouse if someone had paid me. John wanted me to come in whenever I could and paint. Oftentimes, that meant evenings.”

Scarborough recalled, “People dining in seemed to enjoy watching him work on the murals.”

Hancock said the dining crowd there in student-centered Five Points was “active” in those days. “They liked to be art critics while they were waiting for their meals to be served. I got used to getting their commentary. It sure didn’t bother me.”

Hancock’s murals are landscapes that evoke a sense of travel to other times and places.

Scarborough continued running The Villa as a Five Points restaurant until 1993. Meanwhile, “Columbia was spreading out. The new Dutch Square Mall was a big draw to the St. Andrews area, so a lot of local development was coming that way. We had the opportunity to buy a piece of property on Bush River Road, which at that time was still a two-lane road,” Scarborough recalled.

So, while continuing with the Five Points version of The Villa, Scarborough began construction of his second restaurant. The Bush River Road site became the singular location in 1993.

Hancock was stunned when he learned that Scarborough found a way to take the murals with him when he made the move to Bush River Road. Scarborough wasn’t about to leave behind a part of his décor that – along with its home-style Italian dishes and Southern-style hospitality - had become a hallmark of the restaurant.

“Before we vacated, we went down and cut the murals out of the walls. I moved them in a truck,” Scarborough recalled. “When we got them to our Bush River Road location, I screwed the panels into the walls and built frames around them. People still comment about them.”

Some of The Villa’s regular customers request sitting near a section of the murals they particularly like – such as one that has a couple of cats as elements in the piece.

Scarborough also brought in the murals done by Jade Pasteur.

The art individualizes The Villa and helps make it feel like home, thus creating the ambiance Scarborough has insisted upon all along.

“When we say we are a family restaurant, we are implying more than just the ownership – my son J.R. is now general manager of the business, and has perfected two of the cheesecakes on our dessert menu. And over the years, I’ve had cousins, nieces and nephews working here, giving them an earning opportunity to help them work their way through college.” Regarding “family,” Scarborough means, more sweepingly, to convey how guests are treated when they come there, some every single week.

“We know our customers, know their children. When we don’t see them for a while, we wonder if something is wrong. In turn, our staff is like family to many of our regulars.” Scarborough said loyal customers remember staff member on special occasions and ask about them if they note their absence. “Our staff probably thinks I spend too much time out on the floor talking to our guests instead of sticking in the kitchen, but I believe keeping the conversations going with our diners is a large part of my job.”

Scarborough says he likes working the register, especially on Friday and Saturday nights, because it positions him to do something he feels sincerely. “I like to be the last one they see before they leave because I want to thank them personally for coming in.”

The Villa is known and returned to for its meat dishes, from classic spaghetti and lasagna to various Parmesan recipes, 14 choices of pizza, times three when you factor in the size choices and other traditional Italian dishes. The menu also includes lighter versions of some items, taking into consideration dietary needs and preferences of today’s diners.

“As family, we have responded to changes customers have wanted.” Scarborough adjusted to the trend of avoiding carbs and the ongoing need to have vegetarian options on his tried and true menu. Diners now find on the menu Lasagna Florentine, Stuffed Shells and Cheese Manicotti. “In recent years we have taken calls from prospective diners asking what we have on the menu that is gluten free. We have been responsive to all those calls.”

One uptick that has prevailed, so it’s not a trend, is diners’ interest in wine. “Not so many were ordering wine in the early ‘70s,” Scarborough recalled. “Now we keep a nice selection in house. The most popular wine order is still our carafe. I make sure it is a good value for our guests.”

Value has always driven this business major’s decisions. “People come out for the dining experience; some have been with us pretty much as long as we’ve been here. It’s not unusual for me to still work maybe 60 hours a week to make sure they have an enjoyable experience, that their meals are of the highest quality, and that value is served in every dish.”