When Home Brings You Hope

New Beginnings for this Shandon bungalow and its owner. 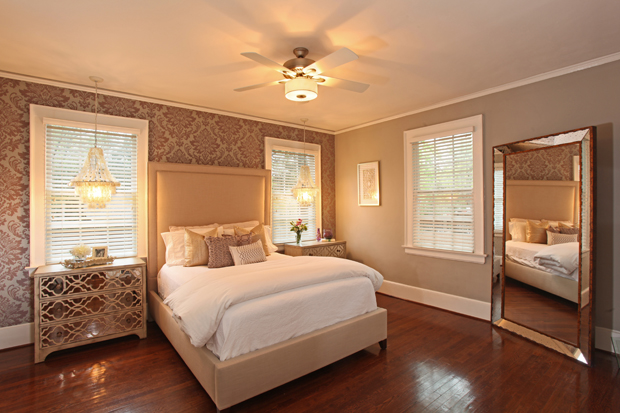 When a life change is thrust upon you, getting your bearings in a different world can be tough. Ending a marriage brings many emotions and the support of good friends makes the transition a bit easier. For this homeowner, it was a divorce that gave her sole ownership of this classic brick American Craftsman bungalow. She could’ve chosen to simply sell the property and move elsewhere to escape the memories of the past.

Instead, she elected to remain in the home and truly make it her own through an aggressive redesign. Her “out with the old and in with the new” approach not only altered the appearance of the home, but its feeling as well.

When she assumed ownership, the home was drastically different, reflecting the ex-husband’s taste with dark rooms and traditional finishes. The owner knew she wanted significant and lasting change, but needed assistance in creating a cohesive contemporary design. This busy professional sought the advice and council of a talented local designer as a partner on this new and exciting journey.

Tina Grimes, the owner of DBT Interiors, was selected to completely transform this Shandon bungalow.  The dreary, dark green living room had built-ins flanking the traditional fireplace with clear glass, dark wood framing and interior lighting. The first of many changes, the fireplace now has a glass tile surround with miniature tiles. “It was like a puzzle, putting it together,” Tina explained. The built-ins are now faced with mirrored glass and a wooden overlay in a pattern that repeats not only in the accent wallpaper over the hearth, but in the master bedroom as well.

The homeowner was open to very girlie, feminine things in her new design. The living room, along with most other areas, features reflective glass surfaces, cool gray walls and bright white trim. The lighting choices are fun and integrate beautifully with the soft goods selected by designer and the owner.  “She’s a minimalist, so you won’t find a lot of things sitting around,” Tina explained. There are key pieces of art in the various rooms, but the term dust catchers would never be used here.

“Her dining room?  He had it very dark, Tina said. “We kept the drapes, because why get rid of something good?” Everything was painted and every light in the house was replaced.  The dining room has an intriguing chandelier that speaks to the simple, clean lines the homeowner pictured. “She has a contemporary flair, so she wanted the glass top table, yet it’s a bungalow style house,” Tina said. “She wanted to take up the style to be more modern.”

She had a few furnishings that were utilized in the new setting, including the dining room table and chairs. She likes to entertain throughout the year and keeping the large table has worked out well. The chairs were recovered and a banquette was added in deep blue to steer the scene away from the traditional. The most familiar element here is the grass cloth wall coverings, which is a bit surprising in how easily it blends with her more modern choices.

A cook’s kitchen is adjacent to the dining room. It’s large enough to create elaborate meals and her love of cooking is evident in her large collection of cookbooks. “She had black granite in the kitchen, it was really dark,” Tina commented when describing its pre-renovation appearance. “She wasn’t keen on pulling it out at first, because that was a large expense to replace the granite. But, it made a big difference when we lightened up the countertops with new color.  The old granite made the cabinets look like they wearing a hat!”

The backsplash became more prominent and with its iridescent properties, the kitchen’s feminine factor increased dramatically. The cabinets and flooring remained. The sink, however, had to go. “She chose a large, single bowl, undermount sink,” Tina said.

Her backyard was a plain blank landscape. To extend her entertaining space, they poured a swath of concrete to form a patio and a walkway to the gardening shed and tied the concrete into the existing stairs coming down from the back of the home. The etched and stamped concrete looks as though it’s always been a part of the equation and was expertly blended with a custom wooden trellis to separate the driveway from the backyard. A new fence completed the yard’s makeover.

As a bungalow, the main bathroom is compact as expected. It’s been remade into a happier space, but she’s still not finished here. The shower was removed and on the first pass, the new version was tiled with a totally iridescent tile, but the quality of the workmanship wasn’t acceptable, so it was removed and installed again with two complimentary tile types. The owner is planning a further modification, with the idea of extending the square footage of the house to include a large, private master bath, leaving the current main bath as a guest bathroom. The extension would also give her a nice walk-in closet, which she needs to accommodate her professional wardrobe as a respected attorney.

The central hallway, which is a common feature in the bungalow style, has a brand new decorative hanging light fixture that just glistens. “We put it on a dimmer, so she can create just the right ambiance,” Tina said as she demonstrated this feature. It’s a natural companion to the other reflective elements, since it’s chrome silver with crystal baubles. In the same theme, all of the door hardware was exchanged for art deco plates with brilliant crystal knobs. While it’s not a contemporary touch, the retro silver plates with crystal knobs look perfectly at home in this design.

To the left off the hallway is her multi-purpose room. “She didn’t want a real guest room, since she has one upstairs,” Tina said. “This room is her office/guest room/television room, all rolled into one with a sleeper sofa. What was interesting is that it was just a dark room, so we ripped it out and had a carpenter come in to create these custom cubes for her cookbooks.” The wall of white wooden cubes with a built-in desk allows her to not only organize but categorize her collection by food type and its region of origin as she chooses. There were so many cookbooks that they could never be located in the kitchen, since it’s simply not large enough. The accent wall is covered in a fun wallpaper with a pattern of interconnected circles and spiraling lines on a gray background.

In addressing the overall lack of storage in this home, Tina was keen to add dressers and functional furnishings to give the owner a place to store her items out of sight.

Right across the hall is the master bedroom. With a crème, fabric-covered headboard, the bed is centered on the far wall, flanked by two matching chandeliers. The heavily patterned wallpaper on the same wall brings the familiar gray with a surprising color pop that gives the room a casual elegance. The dressers feature mirrored glass fronts and look like extensions of the living room built-ins. Tina’s ability for coordinating elements really shines, as the pieces aren’t too matchy, but fit together for a great contemporary quality.

Now that she’s changed the cosmetics of the house, she’s ready to get started on changing some of the walls with her expansion project. Tina and the owner have developed a great partnership and the understanding of the end goal by the designer led to a lovely new beginning. Now, she and Tina can get started on the newest project, which will be a great addition to making this home one to be enjoyed for many years to come.