When Less is More

They know what they like, and it’s not always the same look. In fact, when this couple decided to build a new home, the design was unlike anything they’d ever built or bought. And it’s perfect. 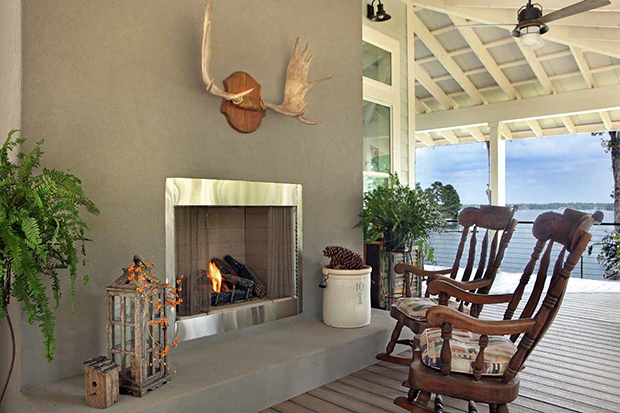 The big surprise for Reta and Jack Coffman was how they fell in love with open concept. During their 60-year marriage, they’d lived in nine different states (one twice) and owned a farm in Indiana for 13 years, a Victorian, a log house, and probably a ranch along the way. The couple remodeled homes and bought new houses, depending on the market at the time and their current needs.

Their many moves were tied into Jack’s long pharmaceuticals career with Eli Lilly. Reta’s career really took off after their three children became self-sufficient. She was a retail sales account coordinator with Elizabeth Arden, Calvin Klein, and Ralph Lauren, among others. They both traveled for work and added to their collection of antiques, art, and family heirlooms.

Along the way, two of their three children settled in the Midlands, and they enjoyed visits and getting to know the lake. After retiring, they bought a partially constructed log house on the Lexington side of Lake Murray, finished it, and happily lived there for 18 years. But when it was time for one more move to simplify their lives and be even closer to family, they found property on the Chapin side and approached Patrick Dunbar of Dunbar Builders Inc. to build their home. They both knew downsizing was appropriate, and as Jack said, “More square footage is not the solution to a livable home.” With their furnishings, as well as a desire for a more modern vibe, “We wanted to blend old with new to give our new house an old soul,” Reta said.

“We found Tideland Haven, a very unusual home plan in Southern Living that seemed just right for us. When we discovered that Dunbar was a Southern Living Custom Builder, we interviewed Patrick and really liked the company’s high standards and willingness to listen.” Yes, they fell in love with their builder. It’s a common practice, but sometimes the relationship can sour through the stresses of building. In this case, it just got stronger. “When we’d ask for a change, Patrick would say, ‘we’ll figure out a way,’ and he always did,” Reta said. “We found a way to live comfortably with a mash-up of southwest, rustic and modern with a cottage feel.”

The house plan featured two bedrooms and two and a half baths. They wanted to add a detached, three-car garage with a guest room and bath, accessible via a breezeway. An architect through Dunbar seamlessly incorporated the changes. Gary Applegate was the craftsman who created moldings and worked magic on the trim work throughout the house. Interior Designer Pam Trussell provided expert advice on choosing fixtures and materials.

“With two of our three children nearby and the third in Augusta, we didn’t need a big rambling house, but we wanted a third bedroom and found the separation a great way to offer privacy to overnight guests,” Reta said. Furnished with antiques, it’s a private, welcoming retreat.

The main house features deep overhangs and a wraparound porch that catches the breeze from multiple directions. An outdoor fireplace with rockers warms the conversation area on chilly nights. Stainless steel cables keep the view front and center in a utilitarian, elegant design. 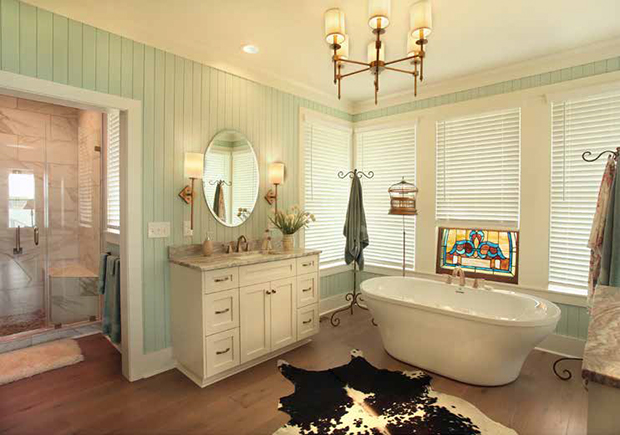 The open concept is immediately apparent upon entering the front door. The foyer has become a cozy reading nook for Reta, and the oversized armoire is topped by a sculpture of a pheasant fashioned from pieces of a 1956 Dodge pick-up truck. With 12-foot ceilings in some areas and 30-ft ceilings in the central part of the home, there is room to accommodate the largest pieces of furniture. The first of several cowhides softens the floor. “Cowhides simply get better with age,” Jack explained.

The house features high ceilings, French doors with transoms, and triangular windows that bathe the central area in light. To the right is the sitting area with comfy leather sofas and the inside fireplace. A painting over the fireplace was chosen by Reta at Whit-Ash and is one of her favorite purchases. “We bought very few items for the new house,” she said. “In fact, it took dedicated effort to decide what would work best in such a different design from our log house. Keeping your favorite art pieces can be a challenge.”

Their treasured arrowhead collection is beautifully displayed. Jack’s grandfather found them on his farm in Kansas, combining history and family in one centerpiece. To the left is the open kitchen, defined by vertical beams. Bar seating allows conversation between the living area and the cook’s domain, and an island doubles as a work surface and display. Toward the lake, a dining table looks out on the water.

“It gives us great joy to watch the deer eating out of our birdfeeder, often with a cardinal perched on top and a squirrel grabbing the extra that falls to the ground,” Reta said, adding their appreciation for an elderly heron who’s “so old he has a name.”

On the first day they began to clear the land, she spotted an eagle flying overhead. “I took that as a special omen that this was a good decision for us.”

Reta and Jack enjoy dining there, with the big windows on the world, as well as on their screened-in porch with its dining table and outdoor ambiance. A porch highlight is a Native American-style feather pouch filled with feathers Reta has found during her walks. It’s a piece of art in itself.

Tucked away behind the kitchen is the pantry and laundry room combination. Everything is just steps away and can be closed off when entertaining. A collection of Fiestaware pitchers above the cabinet adds a colorful touch. To the left of the kitchen is the TV room, with floor-to-ceiling floating shelves holding some of their most cherished possessions: southwest art from an old Sante Fe Railroad calendar, decoys, an antique clock that belonged to Reta’s grandfather, and other treasures. “These are things we collected through the years that we still love,” Reta said.

There is a bedroom and private bath, as well as a half-bath for guests.

Around the corner is the master bedroom suite, with large windows that bring in the light when another day dawns on the water. A sitting area invites a place to relax and enjoy the view. “Grandmother’s Stories,” an original oil painting by artist Mary Beagle, sits on an easel in the corner. The master bath has a stand-alone tub and walk-in shower. Walk-in closets are opposite the tub.

Builder Patrick Dunbar says that he has never had so many calls as the ones about the Coffman home. “It’s attractive and a bit different, and people are drawn to it,” he said.

The entire package feels expansive – in a compact sort of way. Everything this couple could need or want, surrounded by beautiful things, collected or inherited, is accessible in an open design that defies pigeonholing.

And at the end of every day, you’ll find them sitting on their porch, watching the water and all the life that flourishes around them.