The South Carolina State Museum is bringing a whole new – and in many ways unique – perspective to those who visit.

By Jackie Perrone  Photographs by Rob and Jon Photography 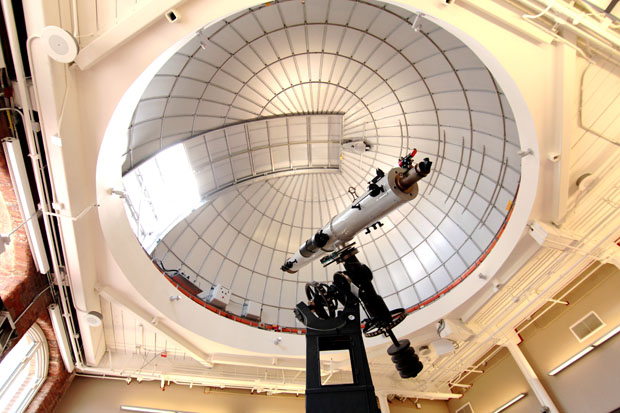 In 1988, South Carolina proudly unveiled its jewel-box of memory, The South Carolina State Museum, which quickly earned the title, “Smithsonian of the South.”

Today, 26 years later, a new unveiling takes place. Step outside and listen: that rushing sound you hear just may be coming from the oohs and aahs around the state.

The State Museum recently held a grand opening, revealing a wondrous display of new resources pointing toward the future. Its slogan of “Windows to New Worlds” hardly begins to describe the dazzling features which await a visitor to our state treasure trove. Some of the new features rate as “the only in the world.” Others are a “first” for our state or our nation. According to the forward-thinking leaders who headed up this project, we’re not playing catch-up; we’re leading the field for scholars and tourists and anyone else looking for a mind-expanding experience.

William Calloway is Executive Director of the State Museum. “We’ve engaged the best planners and builders in the country to make sure that everything we do here is state of the art,” he says. “The new resources will be offered for expanded hours, such as night vision, and with interactive capabilities we’re never had before.”

Calloway fits easily into his slot as director. He is a native of Charleston, with degrees in electrical engineering from Georgia Tech and Master of Business Administration from the University of Houston, Texas. After earning his stripes in theme-park development, he has brought his combination of technical expertise and capital development skills to the $21 Million expansion project at our iconic museum.

From the expanded entrance, which now includes a café, to the handsome new wing showing off the tools for reaching outer space, our State Museum offers exploration and entertainment for all ages.

This facility is the first of its kind in the U.S. to have under one roof an on-site and online observatory and classroom, a 55-foot digital planetarium dome and theater, a 4-D multi-sensory theater, plus an outdoor viewing terrace. This sets up our state to join the cutting edge of education, particularly in the critical areas of Science, Technology, Engineering and Mathematics (STEM).

A walk-through of the highlights:

The Boeing Observatory features a 1926 Alvan Clark 12 3/8” refracting telescope, sometimes known as “The Stradivarius” of its field. Old and classic, the telescope joins the 21st century with a new digital control system, with advanced technology that allows users to access the instrument remotely through the Internet. It was donated to our state museum by Columbia University in New York City, where South Carolina native Dr. Charles Townes studied. He went on to discover the laser and the maser which have revolutionized many areas of technology.

This museum is the first in the U.S. to allow students and teachers remote control of a digitized vintage telescope for education purposes. School children have always flocked to the State Museum and attendance is expected to grow significantly, but now for the first time they can also take part in viewing while sitting in the home town classroom.

Professional development for teachers is part of the Boeing gift to our community.

The Rev. Dr. Solomon E. Jackson 4-D Theater is the only permanent 4-D theater in South Carolina, combining 3-D film experiences with the fourth dimension of real-life sensations such as scents, blasts of air, vibrating seats, and water spray. Short films will be shown on rotating schedules during museum hours; The Polar Express in 4D is scheduled for the November-December period. You may recognize the donor’s name as the Columbia resident who won mega-millions in the lottery several years ago. He now devotes his time to giving away that money in support of truly worthwhile causes.

The Blue Cross-Blue Shield Planetarium and Theater features a 55-foot dome-shaped projection screen, which brings the motion of the night sky to life. It is capable of showing the night sky from any location on Earth. Also it can show films on both space and non-space topics in an immersive format. Thus, audiences can “fly” through real-life models of the universe. Through the museum’s partnership with NASA, it also can access real-time experiences, such as a live shuttle launch or interacting with astronauts on the International Space Station.

The planetarium’s programming and extra performance space allow it to extend beyond astronomy and space shows, setting it apart from many other such facilities. Creative arts and music presentations can be live, film-based, or a combination of the two. “Fly Me ToThe Moon” from a Gervais Street launching pad? An interactive performance space in the universe: how cool is that?

The State Museum reflects much of South Carolina’s intimate connection with the space program, through its local astronauts. General Charles Bolden, Astronauts Ron McNair and Charles Duke are just three of the adventurers who made their mark by pioneering in space. Mementoes of their trail-blazing achievements continue to occupy an important exhibit at the museum.

One-of-a-kind is the Robert B. Ariail antique telescope collection, verified as the largest public collection of early American-made telescopes in the world. The oldest of these 65 rarities dates back to 1730.

The Lipscomb Gallery continues to display art of and for South Carolinians, in a renovated and enlarged space. Locally-created art takes its rightful place alongside the accomplishments of technology and science.

Among other significant donors to the expansion are SCANA and Colonial Life Inc.

Of course the State Museum has earned its popularity through 26 years of education, entertainment and display. The features which brought it notice over the years are being burnished and brightened for the future. The enlarged public lobby, free to the public, will include a stage for performances and demonstrations as well as some artifacts representing the museum’s four disciplines: art, cultural history, natural history and science and technology. The reopened Cotton Mill Exchange gift shop enjoys a larger space, and three additional classrooms are added as multi-purpose resources.

The new lobby features three partners, each with its own gallery: The Columbia Visitors Bureau (CVB), South Carolina ETV (SCETV), and Parks Recreation and Tourism (PRT).

An observant reader will notice names prominently displayed with the exhibits. Business and industry have partnered with state and local governments to underwrite these important resources. Naming rights are available in the form of bricks, thresholds, and plaques, and donations are welcomed. The State Museum expansion was funded by state government along with their pledge not to ask for additional operating funds. It is expected that revenues will rise to cover costs, in the form of admission tickets, event rentals, and ongoing donations from supporters.

Group visits, an integral part of the State Museum’s agenda, will enjoy an enhanced experience in the new facilities. A new student entrance has been developed on the east side of the building with special provision for the buses which bring them in. They will be dropped off at the Planetarium and picked up at the main entrance. Near this new access, a lunchroom with a full kitchen is now provided for their use. This space can also be used for meetings and summer camps.

Director Calloway and his staff want every visitor to realize that the 19th-century cotton mill, Columbia Mills, which made all this possible is still being honored and treasured. This 225,000 square feet of space, framed by antique brick and solid maple floors, provide an environment unmatched in other forums of this type. The structural integrity of this building supports the museum’s mission of a focus on history while educating for the future

In the South Carolina capital city where three interstate highways converge, no one in the state will be more than 3.5 hours away. The numbers of scientists, scholars and tourists from around the world should increase dramatically. Attendance and revenues are expected to grow exponentially and immediately.