Curl up with these books suggestions from the Richland Library 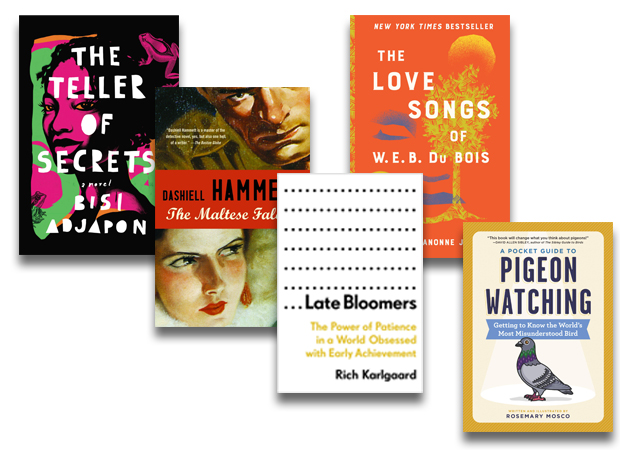 Don’t be daunted by the size of this tome! Clocking in at over 800 pages, every page of this beautifully written, ambitious multi-generational saga will keep you captivated. The story follows Ailey, the youngest family member from her childhood through adulthood. It alternates with her family’s story, starting with her Native American ancestors in Georgia through the present day. Ailey grows up in the city but spends her summers with her mother’s family in a small Georgia town and struggles to find her own identity while reconciling the two present worlds she experiences personally and the past experiences of her family. Love Songs is filled with trauma and triumph, family quarrels and family love, strong women, and compelling storylines.

“A Pocket Guide to Pigeon Watching”

Ever look at a flock of city pigeons and wonder why sometimes there’s a brown one? Part history and part field guide, this book will help you look beyond the pigeon’s “rats with wings” reputations and see a noble bird, valued for centuries for its wayfinding abilities (and sometimes for its edibility!) Learn about the pigeon’s common feather patterns, social structures, and habitat through charming illustrations, and remember that even the most urbanized concrete canyon is a part of the natural world.

“Late Bloomers: The Power of Patience in a World Obsessed with Early Achievement”

According to Rich Karlgaard, American culture’s obsession with high achievement in youth, embodied in figures such as Mark Zuckerberg, makes little allowance for the promise and potential of late bloomers.

Karlgaard, himself a late bloomer, struggled to find his path in his twenties but became a successful author and the publisher of Forbes magazine. He cites many cases of remarkable people, among them Harry Potter author J. K. Rowling and investment guru Ken Fisher, who found their true calling only after going through a period of aimlessness and false starts in young adulthood.

“The Teller of Secrets“

This dazzling debut from Nigerian author Bisi Adjapon explores gender inequality and self-discovery through the eyes of Esi, a girl growing up in 1970s Ghana. Smart and feisty, Esi observes the impossible expectations placed upon women in her society as she grows up in a house full of sisters and aunties ruled by an iron-fisted patriarch. She notes the various indignities with a razor-sharp wit, bringing a solid dose of humor to the story, while the visceral descriptions of Ghanaian life woven into the clean, clear writing bring it to life. As Esi learns to walk the tightrope of balancing her desires with the weight of cultural expectations, she grows into a self-possessed young woman that readers will be sad to bid farewell.

The Maltese Falcon, first published in 1929, holds up well for a novel published over 90 years ago. The book is definitely a product of its time, with stereotypical female and gay characters, but it is an iconic example of the hard-boiled crime novel and is a fun and engaging read. If you’re only familiar with the 1941 film noir starring Humphrey Bogart give the story a read (Spade is taller and blonder in the book), and if you haven’t read the book or watched the film, this is your chance!