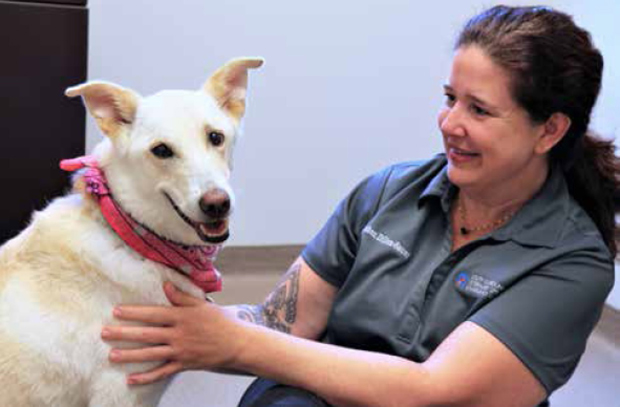 You might not expect a turtle to be among the many patients at South Carolina Veterinary Specialists & Emergency Care on Fernandina Road, but they serve all sorts of clients. Patients include the usual furry, fluffy and feathered species, but their roster of success stories also includes Betty, the Mata Mata Turtle who originally hailed from the Amazon River Basin. Columbians might know her best from our visits to Columbia’s Riverbanks Zoo, where she happily returned after her life-saving treatment.

Admittedly, not all their customers have quite the notoriety as our world-famous zoo’s lineup of stars, but they all hold a starring role in their humans’ hearts.

Animals have a way of taking over our hearts and lives and becoming members of the family. We hunt meticulously for the best food, we treat them to day camps and pet spas. We’re not naming names, but some fur-parents dress up their pets, have their hair and nails done and carry them in pet pocketbooks – not that there’s anything wrong with that – but, this writer has German Shepherds, so the puppy-purse is out of the question for me.

The bottom line: most of us humans will do anything for our beloved fur-babies.

That’s why having an array of specialists, as well as 24/7 emergency treatment options, when our primary care vets either don’t provide particular specialties – or are not open when an urgent need for care arises – is often the difference between life and death for the pet, as well as the resultant elation or heartbreak for us.

Take Rex, for example. This gentle giant found good fortune and love with Jenn McCallister, the owner of Loose Lucy’s in Five Points and one of the singers in local Columbia music sensation, Jelly Roll and Delicious Dish.

She is possibly even more famous for being one of the best kitty-mamas in the state of South Carolina. She serves as a de facto cat rescue resource for those of us who are new to feline furries, but are valiantly trying to catch on.

Rex was diagnosed with diabetes and treatment included insulin. Upon subsequent rechecks, his levels remained high so the dosage was raised a few times.

“I had fallen in love with Rex instantly and we really bonded,” McCallister said. “My husband and I both adore cats and have had many we loved through the years, but some just seem to be particularly special. Rex was that for me, so I was already worried about him.”

“Late one night, after I’d started him on a fresh vial of insulin that day, I heard Rex crying, so I got up to check on him,” McCallister recalled. “It was a cry I had never heard, and when I held him he didn’t have any muscle control.”

She knew he had to get to the vet right away, but it was the middle of the night. She called the emergency number at South Carolina Veterinary Specialists & Emergency Care, described the problem and was welcomed to bring him in immediately for evaluation and treatment.

“Staff actually met us outside, carefully transferred him, and rushed him into treatment,” she remembered, her voice filled with fear – as well as the helplessness we feel when our animals are sick but they cannot tell us how or why. “Once SCVS&EC had him stabilized, we were able to transfer him to his primary care vet, where he recuperated.”

As it turned out, the medication Rex was on needed to be refrigerated but McCallister had not recalled that from the original instructions, so the fresh vial was much stronger, resulting in a diabetic coma.

Thanks to the quick response by his owners and emergency staff, Rex lived a long and happy life after his close call with death.

McCallister advises pet parents to heed everything vets say in the clinic and ask lots of questions to be sure they know exactly how a medication is to be stored and administered. One small detail can make the difference between a healthy cat benefitting from treatment and one who might have died. For that reason, SCVS&EC sends home written instructions with every pet.

“You are distracted and stressed when you are concerned about issues with your pet in the vet’s office, so I tell everyone to be sure they understand the written directions,” she advised. “I no longer hesitate to ask detailed questions that will make the difference in our pets’ health.”

“That’s why we do our utmost to educate you to all factors affecting your pet’s health,” said Veterinary Internist Corinne Goldman, DVM, MS, DACVIM (SAIM). “The goal is to keep your pet as healthy as possible by working along with your family veterinarian to give your pet a complete health care team. Our merged specialty and emergency departments complement total care with efficient and timely services.”

“After their wonderful care, we were fortunate to be able to enjoy many more years of happiness with Rex, and he became the inspiration for my adoration of ginger kitties,” she said.

Another local star, a formerly abused German Shepherd Dog, who had been starved to a mere 35 pounds by his first owner, was adopted by a dedicated animal lover after being seen as Pet of the Week in the local newspaper. “Rocky” went on to be a media star, but started his life with his new mama with an extremely painful back as a result of the breaks inflicted on it by kicks from his cruel former owner. His backbone was inflamed with “the worst arthritis in a young dog” his primary care vet said he had ever seen. Rocky was put on a medicine regimen that was showing great promise in older dogs with arthritis. His time frame on the drug was longer than most because of his youthful starting point. After two years with no side effects, one evening he experienced listlessness and no desire to eat or drink. After he collapsed, his puppy mama rushed him to SCVS&EC where he was immediately taken in, put on an IV drip for fluids and treated for liver failure. Another viable substitute for the pain was prescribed; so with new meds, careful oversight of his activity and twice-a-month acupuncture, Rocky lived to the ripe old age of fourteen – a gift to his loving pet parent of nine more years of his special brand of joy.

In addition to emergency care, SCVS&EC offers an array of specialists to serve the needs of pets with certain challenges. Their board-certified specialty and emergency veterinarians recognize a basic principle – compassionate care stems from informed decisions backed by innovative technology, experience and insight.

One aspect of veterinary medicine that pet parents should look for is accreditation through the American Animal Hospital Association. Meeting the rigorous standards of the AAHA is a task that certifies the care you get is from the best possible professionals at the best possible facilities. Only 15 percent of animal hospitals in North America meet the AAHA’s stringent standard, recognized worldwide as the benchmark for quality care in veterinary medicine.

“Our hospital regularly undergoes AAHA evaluations to ensure we comply with the association’s high-quality standards of care that cover nearly every aspect of our hospital— surgery, pharmacy, laboratory, exam facilities, pet health records, cleanliness, emergency services, nursing care, diagnostic imaging and anesthesiology,” said Dr. Goldman. “Then we go that extra mile by truly caring about you and your pet.”

McCallister applauds them for saving her pet’s life and remembers them being in touch a few days after Rex’s misadventure, and again a month later when they checked on his status by phone.

It’s reassuring to know that the Midlands has this resource – the best emergency and specialty care is right up the road – with a staff of empathic, specially-trained professionals to discern what is wrong with your animal, then to have the means and capacity to treat the pet medically, and still sustain sufficient energy to comfort the distraught pet parent as well.

For our pets to survive and thrive, their 24/7 availability and top-notch professionalism is equally as important is as our daily love and care.