Dinner plans are easier with one of Columbia’s latest establishments, Casserole 2 Go. 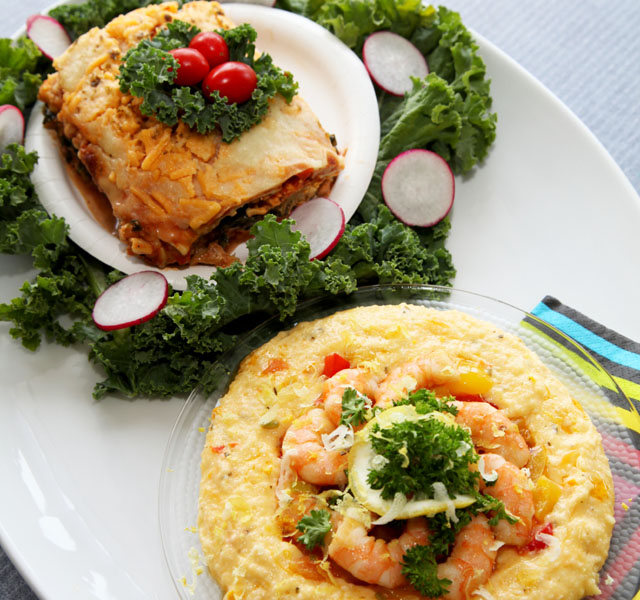 After a long winter of cold, rain, ice, snow, and yes, even earthquakes, most of us would rather be outdoors enjoying the Carolina sunshine than coming home from work and getting stuck in the kitchen. One new solution for Columbians is Casserole 2 Go, located downtown.

As the name implies, Casserole 2 Go offers a variety of prepared casseroles ranging from Chicken Pot Pie to Four Cheese and Beef Lasagna. The lasagna is among the favorites, says owner Phillip Mincheff, along with the southern staple Shrimp and Grits and the more colorful Spinach Walnut Manicotti.

Whether you are a single working professional or a stay-at-home parent strapped for time, Casserole 2 Go has something to offer. Casseroles come in small, medium and large. Casseroles may be purchased frozen or made to order. Mincheff offers a number of vegetarian dishes and will even tweak recipes for customers with gluten intolerance or food allergies.

The restaurant is also open for lunch, serving a variety of sandwiches, salads and mouth-watering desserts, made from scratch. (Do try the Chocolate Mousse Cake!)

Mincheff’s path to small business ownership has been a winding one. His family immigrated to the United States from Germany when Mincheff was six years old. (His father, Thomas, is part German, part Bulgarian; his mother, Ekaterina, is Bulgarian). The senior Mincheff completed his education and residency to become a general surgeon, moving the family first to Pennsylvania, then Texas and New York before settling in Hartsville, S.C.

Mincheff interviewed for positions following graduation in 2000, and ended up working for two years as a legal assistant. For a time he considered entering law school to pursue that as a career, but decided it was not for him. He felt the desire to return to “a natural inclination” toward creative expression. He applied and was accepted into the architecture program at Clemson.

From there, Mincheff’s journey took an unexpected turn.

His academic career came to a sudden, jolting halt in March 2006 in Clemson when a driver ran a red light, hitting Mincheff in the driver’s side as Mincheff was pulling into an intersection. “It was life altering,” he said. “I was nearly killed.” His only memory of the accident is being pulled out of the passenger side window. He spent a year and a half recovering. A delicate bone in the wrist required two surgeries and eight casts to heal.

Mincheff recalls it was a dark time for him. He was unable to return to school and pondered his next move. Among his family’s network of Bulgarian friends was Liliana Markoff Zografov, whom Mincheff fondly called Aunt Lillian, the matriarch of Lillian’s Eatery and Bakery on Forest Drive. She invited him to work in her restaurant and try his hand at cooking.

“She is not only the person that inspired me most of all to develop a strong interest in cooking as a possible profession but allowed me to see what a restaurant business is like,” Mincheff said. Sadly, Zografov passed away just last year. “She was truly a dynamic person, full of life, colorful as can be and a true inspiration.”

Mincheff found cooking another outlet for his artistic drive. “I really enjoyed it, the creative aspect of it,” he said, “and, I found I had a knack for experimenting with seasonings and herbs. I decided this was the path I was going to continue.”

After two years, Mincheff made the decision to venture out on his own. With his parents’ backing, he opened Casserole 2 Go in December in the building that previously housed Applause Catering on Laurel Street. With a kitchen, food prep area, restaurant range, walk-in coolers and storage area already in place, the space was ideal, said Mincheff. He brought his design skills to play renovating the front of the restaurant, tearing down two walls to create space.

Entering the restaurant, the visitor first sees what appears to be a large wedge of Swiss cheese â€• a wall that Mincheff designed and had installed between the restaurant seating area and the kitchen. Portholes offer a peek into the food prep area. In the front window, tiny foil casserole ornaments hang from lantern shades. The seating area is light and colorful. A glass-doored freezer holds a selection of casseroles while another case displays the delicious cakes and cookies.

The recipes are all original or adapted by Mincheff, his mother, and friend Fiki Keten, who had also worked at Lillian’s. Keten is the creator of Casserole 2 Go’s desserts and also shares casserole cooking duties with Mincheff. Foods are prepared with fresh ingredients, and Mincheff strives to use mostly certified S.C. Grown and organic ingredients in his dishes.

For the health-conscious, Mincheff said he tries to limit fats in his dishes, selecting low-fat cheeses, for example. His Spinach Walnut Manicotti was adapted from a Weight Watchers recipe several years ago.

Since opening in December, Mincheff’s business has been growing steadily. Downtown employees are stopping by for lunch and enjoying unique sandwiches and salads. Local businesses are ordering boxed lunches for their meetings. Quite a few customers have ordered multiple casseroles to take to friends experiencing surgery, illness or the loss of a loved one. Planning a long weekend at the beach soon? You may want to add a Casserole 2 Go dish to the cooler.

Looking ahead, Mincheff said he can envision special events in his restaurant, such as an open house for area businesses.

Mincheff is part of the community of smart, young business owners contributing to the revitalization of downtown and sharing the challenges. Mincheff said he is receiving much support from the City, in particular the City Center Partnership to make his business successful.

Casserole 2 Go is conveniently located at 1208 Laurel Street, just off of Main Street. Free parking is available beside the building.